Invest in Other Ventures 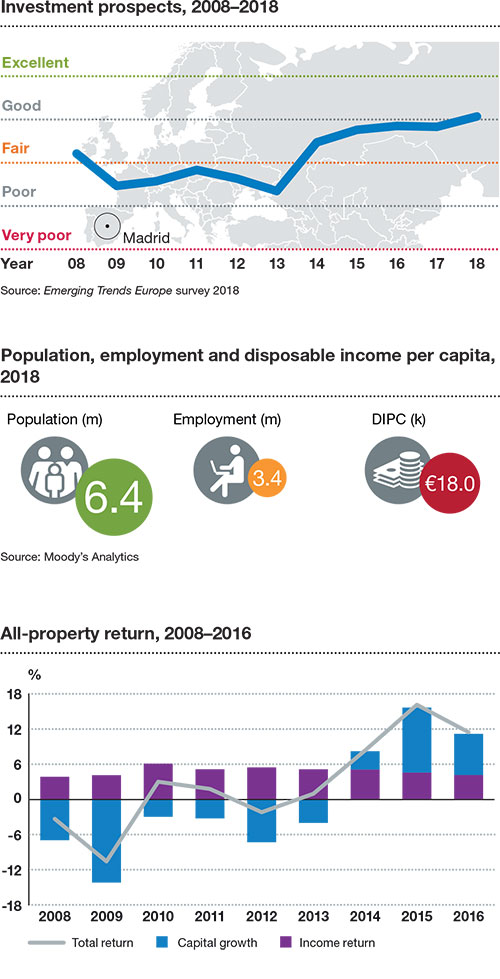 Madrid’s substantial office market is in transition – after a cycle of yield compression, office rental growth is finally starting to come through.

Respondents cite plenty of other reasons to invest in Spain, but the capital’s rental growth story is this year’s biggest change and arguably the most attractive opportunity. It explains why Madrid jumps four places to feature in the top five. “The increase in prices in the last two years has been due to the expectation of rental growth, which hadn’t materialised and is now starting to; that should lead to some increase in value, and buyers who had backed off a bit might start to get more aggressive again,” says an opportunistic fund manager.

“We have seen yields tick down in the last six months as the political uncertainty on the continent has dissipated,” chimes a global fund manager. “They will stay at those levels, so then it becomes a question of rental growth. We are in a positive rent cycle, and Madrid is very early in that cycle so there is scope to make money off these very low cap rates.” Compared to European capitals further north, rental growth has been held back by the hit the Spanish economy took after the global financial crash; unemployment has been falling steadily but is still around 17 percent. Sareb, Spain’s bad bank, sits on €82 billion of sour property loans and only sold €1.5 billion-worth last year – implying a 54-year backlog if it does not speed up. But at least this inventory is no longer on the books of the banks, many of which are lending again.

The country’s recovery is now going at full speed and is one of the fastest-growing in Europe. Spain’s GDP growth is impressive – 3 percent last year and expected to be similar this year and next.

The 2017 real estate investment volumes are on course to surpass the historic peak with some large portfolios on the market, and there are buyers of every stripe for retail and hotels as well as for opportunities to capture rental growth in the city’s office CBD and office and logistics submarkets. Student housing is sought after, but with the only two Spanish portfolios of scale, Resa and Nexo just traded, would-be investors will have to be prepared to develop. It is a similar picture for other operational assets as well as for city centre residential; the latter is undersupplied and is enticing an increasing number of investors, both domestic and international.