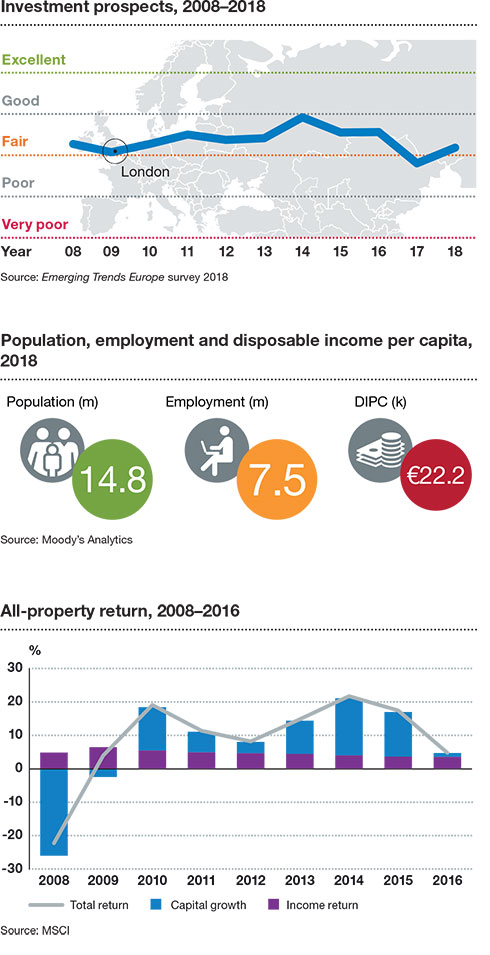 London continues to languish near the foot of the rankings again this year. Brexit still subdues interviewees’ expectations of a market that was already considered by many to have peaked. “London is not going to offer investors very much in the next couple of years,” cautions a leading UK-based property investor. “We believe that we have reached the peak of asset pricing and rental values are under pressure, so returns will be low.” Domestic investors are selling: “Prime assets are at the top now, which is why we are seeing a lot of CBD office buildings going up for sale”, yet properties continue to find buyers despite low cap rates. Investment volumes remained robust in 2017, buoyed by the sale of two of the City of London’s landmark skyscrapers.

“Uncertainty has certainly not dampened down liquidity and pricing for grade A stock in London. Since Brexit, you’ve seen the sales of the Walkie Talkie, Cheesegrater and other good buildings let to good tenants on long leases going out at record yield levels,” remarks a fund manager. London remains a safe harbour for Asian capital in particular, and its appeal has only been enhanced by the decline in the value of sterling following the EU referendum: “What Brexit did was devalue the pound, and so instead of buildings being devalued, pricing has remained the same because of the currency,” comments a financier.

Some observers believe a correction is inevitable: “Prices are not really factoring in what is likely to be coming. There are plenty of cranes in London, so there is supply coming through. If we get a significant slowdown in demand there will be an imbalance, and that will begin to impact next year. We have scenarios on London rent correction ranging from 10 to 20 percent.”

However, investors seeking bargains have been disappointed so far: “There are a lot of people with a war chest ready and waiting in London, as we have been, for distress, which just hasn’t come.”

Moreover, some interviewees are certain that the current climate of political and economic uncertainty will have limited long-term impact on a market of London’s size and diversity:
“We have seen fluctuations in the London and British markets for decades, and we think this is just another fluctuation.”